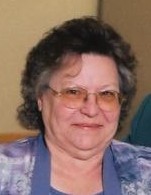 Anna Belle Peyatt, 79, of Upperglade went home peacefully to be with the Lord on Friday, January 18, 2019, while at her home, surrounded by family. She was born September 02, 1939 in Gauley Mills to James Lilmer and Lillian Williams Hawkins and was a homemaker. She was a member of Gladeview Community Church and enjoyed spending time with her family.

Adams-Reed Funeral Home is honored to be serving the Peyatt family.

To order memorial trees or send flowers to the family in memory of Anna Peyatt, please visit our flower store.