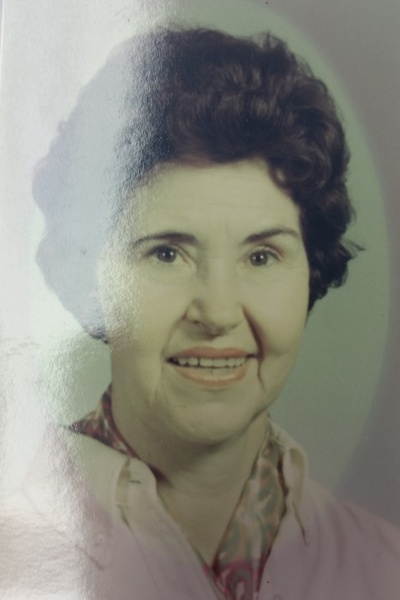 Audree Melissa Cobb Perrine, 97 passed away early Easter Morning on March 27, 2016 at Keepsake Village in Columbus, Indiana. She was born in Boggs on May 19, 1918, the daughter of the late Alfred and Stella Sanson Cobb. As the last living member of her generation, she was preceded in death by two daughters Barbara Perrine Baker and Debbi Perrine; brothers Carl, Arnold, Kellis, Junior, Bill, Harold, Elbon, and Roy Gale; and sisters Juanita and Virginia.

Audree married Clifford Loring Perrine on December 25, 1937 and lived with him in Webster County for many years, interrupted only during her attendance as a student in Education at Glenville State and Marshall University as well as by brief family visits and vacation trips to the beach.

Having grown up on a small farm, she was especially aware of the activity within nature and continued to enjoy planting and tending a small garden at her home in Cowen. Her home-cooked meals were a genuine treat for her family and her energy level was an inspiration to us all. Excepting the time she spent reading books (another favorite activity), she seemed to be otherwise always involved with a project-of-the-moment.

She was a fourth grade teacher at Cowen Grade School for many years, a dedicated member of the Cowen Baptist Church, and active in the Garden and Women’s Clubs.

Surviving are her daughter Virginia Perrine Nerz of Columbus, IN; grandchildren Kristina Nerz Ciserella of Chicago, IL and Ryan Nerz of Miami, FL; and great-grandchildren Claire, Nicole, and Wyatt Ciserella. Family and friends were a special part of her life.

Celebration of Life Services were held on Thursday, March 31, 2016 at 10:00 AM at the Chapel in West Virginia Memorial Gardens where burial immediately followed.

Online condolences may be left for the family at www.adamsreedfh.com.

Adams-Reed Funeral Home is honored to be serving the Perrine family.

To order memorial trees or send flowers to the family in memory of Audree Perrine, please visit our flower store.