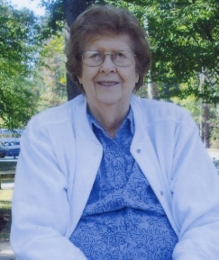 Ilene Virginia Wayne, 90 of Summersville passed away on Monday, September 10, 2012 at Fair Ladies Care Center in Winfield.  She was born March 2, 1922 in Nicholas County (Curtin) to Oliver Earl and Lela Ann Green Goff and was a former clerk at the Cotton Boll for 12 years.  She lived the majority of her life in Webster County except for the three years in Crown, WV.  She was Methodist by faith and attended the Pearson Chapel in Zela.  She was a member of the Order of Eastern Star Group 145, enjoyed gardening, canning, crocheting, tatting, and spending time with her family.

Friends may join the family for visitation on Saturday, September 15, 2012 from 5:00 to 8:00 PM at Adams Reed Funeral Home.  Funeral Services will be held on Sunday at 2:00 PM at the Funeral Home with Rev. Keith Williams officiating.  Interment will follow in Okey Wayne Cemetery, Cowen.

To order memorial trees or send flowers to the family in memory of Ilene Wayne, please visit our flower store.