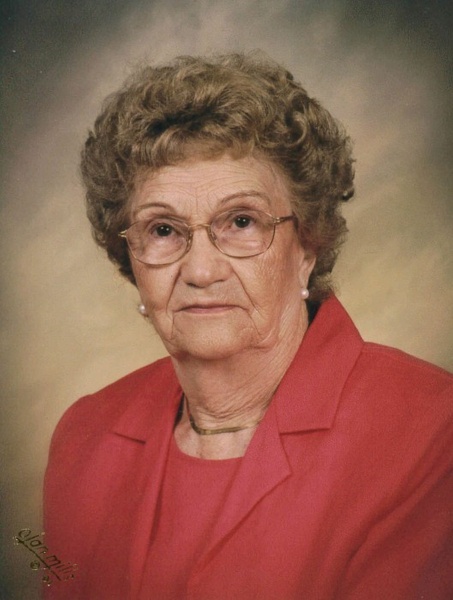 Maysel Irene Wood, 92, of Camden on Gauley, went home to be with the Lord on Sunday, July 3, 2016, surrounded by her family and caregivers.

She was born on November 19, 1923, in Webster County, WV, the daughter of the late Robert Holbrook and Effie Rose Holbrook.  In addition to her parents, she was preceded in death by her husband of 70 years, General Leonard Wood; one son, Robert Wood; and brother, James Holbrook.

She is survived by one son, William Wood of Summersville; sister, Ida Kocher, of Lady Lake, FL; nephews, James Holbrook and wife, Dana, of Summersville, Steven Holbrook and wife, Jeanie, of Camden on Gauley; nieces, Linda Alsop and husband, Jack, of Webster Springs, and Sue Anne Jenkins, and husband, Bernard, of Fredricksburg, VA; several other nieces and nephews, great-nieces and great-nephews and numerous close personal friends.

Deep appreciation to her caregivers in her final months, Sherry Roach, Angela Frye, Jill Lawson, Anna Lee Smith, Lisa Kincaid, Pamela Wyatt, Mary Lewis, and Sharon Mathes, who lovingly provided care to her.  Special thanks to Clinton and Jill Lawson, who provided care in their home the days following the 2016 flood in Camden on Gauley, WV.

Visitation will be at Adams-Reed Funeral Home, Cowen, on Thursday, July 7, 2016 from 11AM-1PM, with a funeral service at 1PM at the funeral home chapel.  Interment will be at West Virginia Memorial Gardens, Calvin.

In lieu of flowers, the family requests contributions to the Webster County Community Fund, P.O. Box 11, Webster Springs, WV 26288, with a designation in memory of Maysel Wood, for assistance for Camden on Gauley flood victims.

Adams-Reed Funeral Home, Cowen is honored to be serving the Wood family.

Charitable donations may be made to:

To order memorial trees or send flowers to the family in memory of Maysel Wood, please visit our flower store.